Rather dashing, isn’t he? No wonder Grandma fell for him.

Science stuff will return for next week’s Mad Scientist Monday – today, in honour of Remembrance Day, I want to talk about my grandpa.

This is him – Stan Carmichael, who served with the Princess Patricia’s Canadian Light Infantry during the Korean War. He trained as a paratrooper (which I never knew until I made an offhand comment about skydiving involving jumping out of perfectly good airplanes – sorry Grandpa! I totally deserved the dirty look you gave me.) but his unit was sent in as infantry. Grandpa worked as a stretcher bearer. It was his job to carry out the wounded during battles.

40 years later, he returned to Korea with a group of veterans, and was amazed by the outpouring of love and respect they received from the locals. “They love the Canadians,” he says, probably because our soldiers had a reputation for protecting Korean civilians during the conflict. 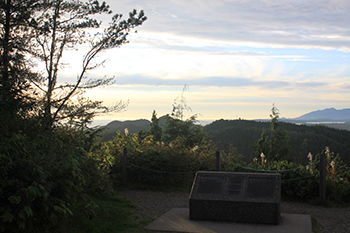 Kap’yong Memorial near Ucluelet, BC

This fall, Grandpa visited the Kap’yong Memorial near Ucluelet, which commemorates the PPCLI’s involvement in Korea. He told me how moving it was, especially when a group of other visitors saw his veteran’s hat and asked him to share a memory of the war. And that’s what today’s about – honouring all those who’ve served…. the survivors and the fallen.

Whatever else you may be doing this long weekend, take a moment to remember. It matters more than you might think. 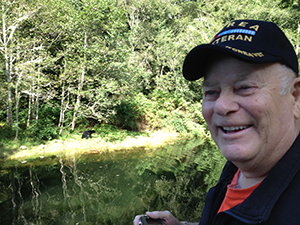 My grandpa. And a bear.

Are there veterans among your friends and family? What will you be doing to honour their service today?