This Hour Takes 22 Minutes – Off Your Life

News.  Sit-Coms.  The Discovery Channel.  The latest “reality” drama.   No matter what you’re tuning in to, you might want to turn it off.  According to a 2011 study, television does more than rot your brain: it shortens your life.

A group of Australian scientists collected data from more than 11,000 people over the age of 25.  They compared the number of hours people spent watching TV every day to the number of years people lived.  The results were shocking.

The researchers compared TV viewing time with other risk factors for reduced lifespan.  This is a chart I made, based on data mentioned in the study: 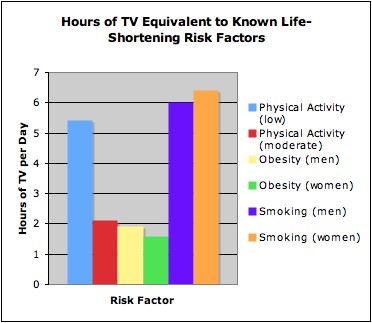 That’s right – watching 6 hours of TV per day appears to be as dangerous as lifelong smoking.  And if you’re thinking that no one watches 6 hours of TV per day, you’re wrong – the average adult in the USA watches about 5 hours a day.  That’s 35.5 hours per week spent watching TV.  Or put another way, almost as many hours as a full-time job.

It might be a little soon to go throwing away your remote control.  This study demonstrates a negative correlation – in science-speak, interdependence between two variables.  In other words, as TV-viewing time increases, lifespan decreases.  That doesn’t mean that television, in and of itself, is directly responsible for early death.  Correlations are not the same as causes.  Indeed, two correlated variables may in fact be responding to the same underlying-and-as-yet-unidentified cause.

In the case of this study, that cause is most likely sedentary behaviour, also known as too darn much sitting around.  And that sitting isn’t just done in front of the tube.  It’s at work, in the car, eating at restaurants and typing out emails.

I learned a lot about the ill effects of sedentary behaviour while researching an upcoming book, Living With Obesity (January 2014), and I’ve been looking for ways to be more active ever since. How do you make sure you get enough activity every day? Easy tips are appreciated!

Filed to: Life, the Universe, and Everything
Tagged with: Living With Obesity, sedentary behaviour, television