Of Bean Sprouts and Frogosaurs: (Plant) Life Finds a Way

Remember that scene in Jurassic Park where Sam Neill discovers that the female frogosaurs have figured out how to change gender, leading to the production of baby frogosaurs, which will now endanger all of humanity because “Life finds a way”?

A friend’s hubby accidentally spilled dry beans down their kitchen drain, and a week later, they woke up to this: 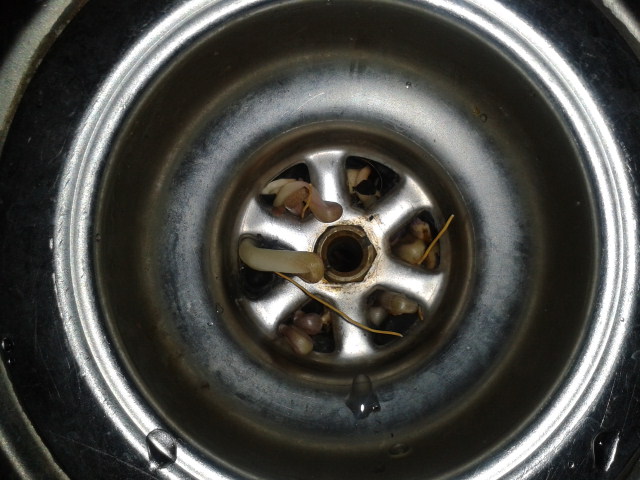 Having grown in almost darkness, surrounded by the detritus of meals and cleaning products past, I’m thinking these are probably mutant bean sprouts that are even now working on a plot to endanger all of humanity. Unlike the frogosaurs, however, we can probably defeat them with a rudimentary knowledge of plumbing.

So you know, that’s a relief.

What about you? What’s the weirdest place you’ve ever found something living or growing? I once found an apple seed that had sprouted inside the apple, but it you’ve got a cooler example, I would love to know!

ANNOUNCEMENT: Fox Talk is now available (in hardcover and paperback) through Chapters/Indigo and through Amazon! You can also order direct from the publisher, Ashby-BP. I get a bigger cut if you order direct, but I would never blame you for taking advantage of Amazon’s free shipping, especially since I usually save up my own orders until I qualify…

Filed to: Life, the Universe, and Everything
Tagged with: bean sprouts, dinosaurs, Jurassic Park

6 Comments on ‘Of Bean Sprouts and Frogosaurs: (Plant) Life Finds a Way’