Lightning Under the Hood, Part 2 – The Battery Revolution

Did you miss Part One – Riker’s Race? Check it out before you read today’s post.

Every battery has the same basic components: the anode (negative electrode); the cathode (positive electrode); and the electrolyte. There’s also a separator, which prevents electrons from traveling directly from anode to cathode within the battery chamber. Instead, they exit through a wire, traveling through a lightbulb or electric motor before re-entering the battery. According to legend, when Raymond Gaston Planté invented the first battery in 1860, he used a separator made from his wife’s petticoat!

Its lacier components notwithstanding, Planté’s lead-acid battery was a major breakthrough. A writer in the June 11, 1881 edition of the New York Times said, “It is quite possible that the man who has taught us to put up electricity in bottles has accomplished greater things than any inventor who has yet appeared.” *

As a power source for electric vehicles, however, early batteries had some problems. Because the electrolytes were liquid, they sometimes froze in cold weather (a problem Canadian drivers still struggle with!). Hot weather was just as bad, because the water portion of the electrolyte evaporated. This meant drivers had to “top up” their batteries on a regular basis. Charles Duryea (whose gas-powered cars lost to Andrew Riker in the 1896 race) once told The Horseless Age that “A set of batteries [is] worse to take care of than a hospital full of sick dogs.” *

Changes to battery housings have addressed a lot of these problems, as did the invention of the block heater!  Today’s gasoline-powered cars still use Planté’s lead-acid batteries as starting batteries, and they were the energy source of choice for hybrids and electrics for decades. After all, lead-acid batteries are cheap and durable.  However, there’s not a lot of power relative to weight.  To address this problem, scientists had to tackle the guts of the battery – the chemical reactions that produced the flow of electrons. 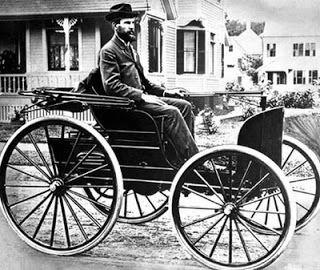 One alternative chemistry that seemed promising involved replacing lead with another metal, nickel.  Nickel-cadmium batteries (NiCAD) had better energy density, which meant vehicles could be driven farther and faster before having to be recharged.  However, NiCAD batteries are highly toxic and difficult to recycle. They also have what’s known as memory: if NiCADs are repeatedly discharged half-way, then recharged, they eventually “remember” this partial state of charge.  As a result, the battery’s full capacity can no longer be used.

Nickel metal hydride (NiMH) batteries are less toxic and less prone to memory issues. However, they’re also more expensive and take longer to recharge.  Before alternative vehicles could really start competing with gas-guzzlers, a completely new battery would have to be invented. But the key breakthrough had nothing to do with cars, and everything to do with portable electronics.

Stay tuned for the final instalment – From Cell Phones to Sports Cars!

Battery University is an AMAZING site if you want more info on the chemistry of electricity. You can also check out my book, Hybrid and Electric Vehicles. Researching the battery bits was really fascinating – especially when I discovered tin whiskers, which I fully intend to name a band after someday.

What do you love (or hate) about batteries? What’s your favourite battery commercial? Are you an Energizer Bunny or a Copper Top?

6 Comments on ‘Lightning Under the Hood, Part 2 – The Battery Revolution’