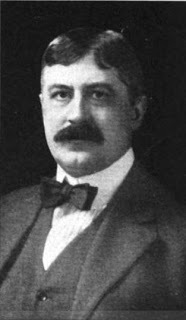 It’s September 7, 1896, at Narragansett Park in Rhode Island. The first car race ever held on a track in North America is about to begin.  These newfangled horseless carriages are the biggest draw of the State Fair, and 50,000 people have crowed around the mile-long dirt oval to see them compete.

The starter cries, “Now go, if you can!” and seven drivers throw their vehicles into gear.   At once, Andrew Riker pulls into the lead, literally leaving his competitors in the dust.  He blazes around the track at a shocking 24 miles per hour and comes “dashing over the finish line, his body bent forward as though holding the reigns over some spirited steed.” *  As the car Riker invented rolls to a stop, the cheering crowd rushes forward for a closer look.

The Riker Electric Trap has leather seats and wheels that are spoked, like a bicycle’s.  It weighs 1500 pounds, more than half of which come from the lead-acid battery pack.  At a speed of ten miles per hour, it can travel for four hours before the batteries need to be recharged.  The car starts with the flick of a switch, runs quietly, doesn’t rattle its passengers, and produces no noxious exhaust.  And thanks in part to this race, it’s about to launch Riker’s career as a successful automaker, respected inventor, and the very first president of the Society of Automotive Engineers. 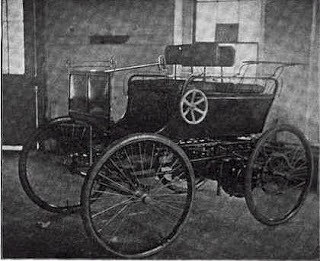 Due to a fire that destroyed most of his personal papers in 1900, we have few first-hand records of Riker’s thoughts on cars in general and his own experiments in particular.  We do know, however, that he believed electric cars were lacking something special – a battery “capable of very heavy discharges, but still not of excessive weight, and this requires some special type of battery.” **  Despite serious effort, no one in Riker’s day – not even Thomas Edison – could crack the battery problem.  Electric cars, despite supporters including the King of Siam and Clara Ford (wife of Henry), were replaced with the faster, cheaper internal combustion vehicles almost everyone drives today.

Thanks to rising gas prices, air pollution, and climate change, however, there’s more interest in electric vehicles today than there’s been since the 1920s.  And thanks to some major battery breakthroughs, they might just replace gasoline cars – before we run out of oil.

You can find more information about Andrew Riker and his vehicles here.  More details on the Narragansett race are available in volume 1(11) of The Horseless Age, and in the September 19 and September 26 issues of Scientific American (1896). You can also check out Hybrid and Electric Vehicles, which was the biggest challenge of any book I’ve ever written. Probably because I’m a biologist. 🙂

Do you drive a hybrid or a electric vehicle? Would you consider getting one?

* “Events of the Day in the World of Sport: First Automobile Fifty-Mile Race Ever Run in America.” New York Times. 15 Apr. 1900.

** “Meeting of the American Institute of Electrical Engineers.” The Electrical World 23 Jan. 1897.

2 Comments on ‘Lightning Under the Hood, Part 1 – Riker’s Race’