For the Love of Chocolate, Move Your Shopping Cart!

How many times has this happened to you?

You’re on your way home after a long day when you suddenly realize you need a loaf of bread and a quart of milk and some brussels sprouts and a case of toilet paper and a new mop, because the old one fell apart after the kids tried to paint their bedroom ceiling with it. So you pull into the supermarket, grab a cart, and head off, confident that you’ll be in and out in five minutes.

Except that it takes 15, because you waste 5 minutes politely clearing your throat, tapping your foot, then saying excuse me at increasing higher volumes, until the person who’s parked their cart in the middle of the aisle stops talking on their cell phone long enough to berate YOU for rudely interrupting their vital conversation about whatever Kardashian is currently trending on Twitter.  After which you waste 5 more minutes completing your shopping while refusing to go down any aisle that already contains another person, because if one more obstructive cart gets in your way, you’re going to have an aneurysm right there in the frozen food section. 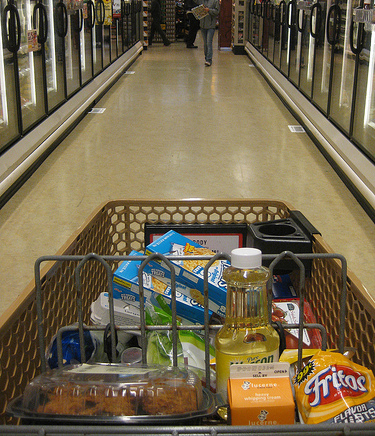 Courtesy of coolmikeol via Flikr Commons

My highly scientific study, conducted during 35 years experience as a shopper, proves conclusively that every aisle in every store is wide enough for two carts to pass each other, without a single scratched wheel. Provided that shoppers obey a basic guideline of common courtesy and pull over when they stop. But either I’m getting super crotchety in my old age, or more and more people are forgetting to do this.

A follow-up highly scientific study, conducted by listening to friends and family rant about this very issue, suggests that not only are more people forgetting to pull over, but I’m not the only one getting crotchety about it.  In fact, I’m fairly certain that cart rage is about to surpass road rage as a leading cause of both apoplexy and homicide.

What is up with this? Are we all just so wrapped up in our own lives that we’ve forgotten we share the world – and the aisle – with other people? I don’t know, but it worries me.

Are you a sufferer of cart rage, too? What other aspects of common courtesy seem to be falling by the wayside, and more importantly, how do we get them back? If you have ideas, I’d love to hear them!

Filed to: Life, the Universe, and Everything
Tagged with: Kardashian, shopping carts, supermarkets

4 Comments on ‘For the Love of Chocolate, Move Your Shopping Cart!’