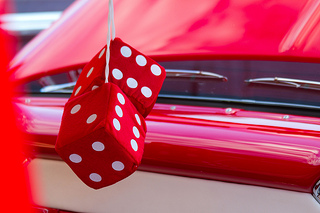 My dad worked for the same company most of his adult life. He was good at his job, and enjoyed it until the last few years, when the priorities of said company began to change. By this time a district manager, he was informed that a corporate car was integral to projecting a corporate image. So he got a shiny new Nissan sedan, and all was well until the company informed him that the only image-appropriate vehicle was a Ford “Death to the Environment” Explorer, and, by the way, gas costs were not going to be their problem. Needless to say, a teeny bit of resentment developed at this point.

That Christmas, I gave Dad a gift designed to make the Explorer less detestable. A University of Alberta travel mug (to remind him of his daughter), some driving music (Traveling Wilburies and Arrogant Worms), and a pair of zebra-striped fuzzy dice, as a joke.

He hung them in the Explorer.

No amount of corporate teasing about “fuzzy balls” could entice him to remove them. More than mirror decoration, the dice were a symbol of his resistance – a small, pointed rebellion against a system he didn’t like, but couldn’t change. Dad’s quiet little rage against the machine.

By the final year of my PhD, I was feeling a little rage myself. The first chapter I wrote for my thesis described a side project – the use of DNA fingerprinting to explore family structure in arctic foxes. In 6 of 8 dens, cubs were born to a single mother and father. In the seventh den, two fox pairs were raising their offspring together (a furry blended family). I found multiple paternity in the final den – one mother’s single litter with two different fathers. It was a neat, tidy study and all it needed was a title.

My test readers were not happy about the one I chose. Universal opinion was that my title, while both accurate and funny, was inappropriate for publication in a scientific journal. Despite their rational and repeated arguments, I would not be swayed. As an aspiring writer who’d ended up in grad school while pursuing a “backup plan,” as someone who’d spent six years miserable enough to contemplate dropping out at three-month intervals, I was way past due for rebellion.

It was time for the fuzzy dice, baby, and in March of 2007, my paper was published in the Canadian Journal of Zoology as “Free Love in the Far North.”

And thus it began.

The Toronto Star picked up the story within weeks. A few months later, the U of A public relations department issued a formal press release. Next thing I knew, I’d interviewed for online science magazines, done a podcast for the American Association for the Advancement of Science, and appeared on the front page of the Edmonton Journal (clearly that last one marked a slow day in news). I faced the frenzy with a mixture of amusement, disappointment (that my side project was more interesting than the important work I did) and triumph, for I knew full well that no one would have cared about my research if not for that catchy, irreverent, rebellious title.

I see this as a story with two morals:

Arctic Fox at the Edmonton Zoo

1) We all need fuzzy dice. Don’t let anyone talk you out of yours.

2) Never – and this one’s for you, writers – never underestimate the power of a good hook.

What are your fuzzy dice, and what do they mean to you? The Talk About FOX TALK Contest ends soon, so share your story in the comments to enter!

Filed to: Life, the Universe, and Everything
Tagged with: fuzzy dice, rebellion, writing, arctic foxes