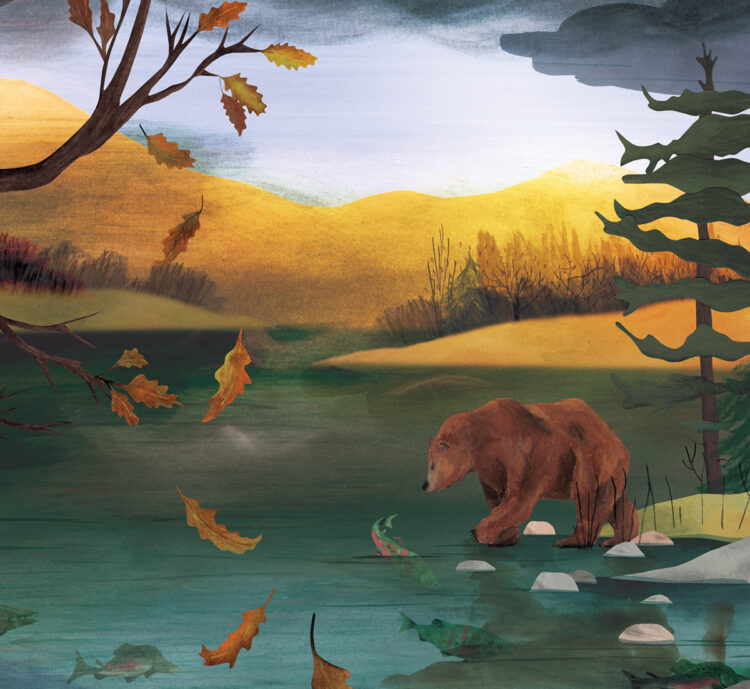 This bear gets better sleep than I do. Art by Josée Bisaillon, from our book, The Boreal Forest

You know those articles about how we should all be getting more sleep? The ones where the first half is dedicated to telling you all the terrifying things that happen to the sleep deprived, and the second half contains completely obvious advice like “drink less caffeine and watch less TV at night?” How about those social media memes about “the ideal length of time to nap”?

I hate those articles. Hate them. Because they’re aimed at people who might actually be able to sleep, if they followed that advice. People who can lie down for a 20 minute nap and spent 19 of those minutes, you know, SLEEPING.

Me? Except for that time in graduate school where the antidepressants knocked me out at the end of every day, I’ve had one nights’ unbroken sleep in my entire life. One, in more than 40 years. Cutting screen time is not going to solve this problem,* no matter how many well-intentioned but mostly-infuriating articles try to shame me into improving my “hygiene,” as if my inability to sleep is somehow my fault.

And it did not help when my new family doctor told me that the long-term side effects of the only-slighly-helpful sleep meds I’ve been taking since I stopped taking antidepressants include increased risks of stuff like fatigue and lethargy and heart disease and Alzheimer’s. You know, the same things you can get as a consequence of… not getting enough sleep.

She did, however, book me for a sleep study – the first one I’ve had in the 17 years I’ve been on said medication. Once I got over the outrage that no other doctor, in three provinces, had thought to do this, I was looking forward to it, because:

b) maybe there is a better, more effective, less scary medication I could take instead.

The sleep clinic booked me for 9:15PM, which was already a bad start, because these days I’m looking for my pillow around 8:30. But because I was the last person of the night, the nurse didn’t finish hooking me up until 11PM. I was therefore way too tired to take a selfie, so you will just have to imagine me, in my moose jammies, wires sprouting from my head and legs, belts around my torso to test for chest movements. The wires, in case you were wondering, weren’t long enough for me to assume my normal sleep position – somewhere between side and stomach – which didn’t help. It was a bad, bad night, but that was kind of the point.

Did I mention they woke me up at 5AM? Driving home in the dark was… exciting.

While I wait for the results** I’m back to wondering – where are the articles for people like me? The ones for people who spend their whole lives sleeping like the parents of a colicky infant, with no actual child in sight? The ones that say:

Yes, we know. It’s awful being exhausted every day. Insist that your doctor order a sleep study.

And in the meantime, have that nap. We’re not going to judge how long it takes you.

What about you? Any advice for the chronically sleep deprived? We will try just about anything…

*I know because I’m a scientist: I did that experiment. Absolutely no measurable difference.

** which the nurse said would take a while, in a tone that could have meant anywhere from one month to six…

Filed to: Life, the Universe, and Everything
Tagged with: sleep, sleep disorders, sleep study, sleep hygiene