Is Throwback Thursday still a thing, or am I totally behind the trend (as always)? Either way, here’s another piece pulled from the depths of my hard drive – an essay I wrote about the most embarrassing moment of many in my childhood, and how it changed my life for the better.

Come, cringe with me! 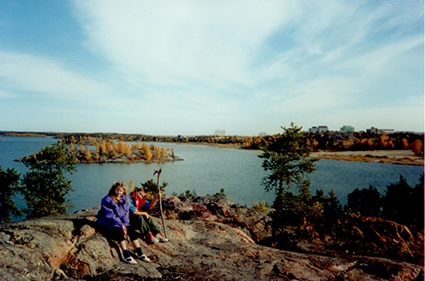 My brother and I, taken in Yellowknife probably a year before this incident occurred. The distortion over my face is due to massive 80’s glasses. And yes, my hair was crimped. See above re: 80s.

A cute guy; a first love. A Home Economics kitchenette. The most embarrassing moment of my life.

I was six years old, a second grader in Pincher Creek, Alberta, when I first fell in love with Timmy. He had curly dark hair, an upturned nose, and a gap-toothed grin. He was also shorter than me, which at the time was irresistible. I adored him, and periodically revealed my affection by jabbing his forearm with the point of a freshly sharpened pencil. While generally unsuccessful, this approach accomplished one objective: he definitely knew I existed.

My family left Pincher Creek for Olds, Alberta, when I was in the middle of the fourth grade. Mid-sixth we moved to Yellowknife, capital of the Northwest Territories. Maybe it was the shifting scenery, the changing faces, the inconstant address. Maybe it was the chronic insecurity engendered by our nomadic lifestyle, of never feeling safe, or feeling at home, or knowing when my playmates would become pen pals once again. Maybe I was afraid that if I laughed, my head would explode. Whatever the reasons, somewhere along the way I began to take myself too seriously. In fact, I took everything too seriously. Were there a contest for “Most Serious Person Who Ever Lived,” there would be no contest, only me.

And that’s when I saw him.

He was tall, rangy, and captain of the volleyball team. His skin was like copper, his hair like coffee, his eyes like night. He had the careless, fluid grace of a panther in the shadows, all wrapped up in total confidence and the irresistible scent of Right Guard. In short, Tim was a god, and I was instantly elevated to high priestess.

I spent all of seventh grade worshiping him in silence; by eighth, I’d confessed my devotion to my family and my best friend Wendy, but could think of no possible way to tell him (after all, nobody uses pencils in junior high). Then one glorious day my father mentioned in passing that Tim’s family had once lived in Pincher Creek. I was ecstatic – common ground! Something to talk about! My big chance delivered to me at last! Right around then, a rational person would have become suspicious.

I was in love: I couldn’t even spell rational.

The next day, in our shared Home Ec class, I drew upon the courage of over-baked brownies and actually decided to speak to him. A reconstruction:

Me: So how long did you live in Pincher Creek, Tim?

Me: I was there for three.

Him: I know. We were in the same class in the second grade.

Me: (small but eloquent pause) Oh.

I lurched back to my own kitchenette, burying my face in Wendy’s shoulder while she patted me helplessly. For a long moment, all I could do was shudder as waves of abject humiliation thundered over me. And then I was caught in the undertow, swept away and drowning in a boundless sea of irony.

I still had no idea who he was.

I took not a single note in the classes that followed, heard not a sound on the long drive home. At last I was in my own room, seizing my faded yearbook from its dusty shelf, frantically scanning the pictures for anyone who looked familiar. And there he was, on page 42: grinning. It was the same mocking grin he’d been giving me for months, only now it made sense. I found myself curled on the floor in a fetal position, the carpet’s pile pressed coarse against my cheek, laughing too hard even to stand.

One might expect love to fade in the face of good sense and total mortification. Nope. While changing my name and joining a convent in the Alps seemed a sensible option, a priestess cannot renounce her faith so easily. And so, from afar and in cautious silence once again, I continued dreaming of Tim. I was, however, smart enough to realize those cherished dreams would never come true (and vindictive enough to want revenge, but that’s another story).

I broke my heart over that boy. Even now – in another city and years later – the pictures in my yearbooks resurrect a ghost of the old longing. But despite it all, I feel no regret. True, I lost all hope of winning my first love, but I gained in the process something liberating and enduring and infinitely more precious. Tim taught me how to laugh again – long and hard and well (and at myself no less). And for this, I will always love him.

Have you ever embarrassed yourself in front of your crush? I spilled – now it’s your turn! Share in the comments.

Filed to: Life, the Universe, and Everything
Tagged with: Throwback Thursday, young love, embarrassing moments