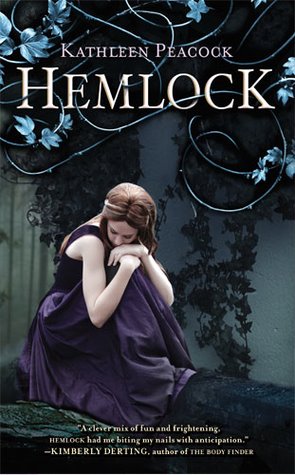 Mackenzie and Amy were best friends.

Until Amy was brutally murdered.

Since then, Mac’s life has been turned upside down. She is being haunted by Amy in her dreams, and an extremist group called the Trackers has come to Mac’s hometown of Hemlock to hunt down Amy’s killer: A white werewolf.

Lupine syndrome-also known as the werewolf virus-is on the rise across the country. Many of the infected try to hide their symptoms, but bloodlust is not easy to control.

Wanting desperately to put an end to her nightmares, Mac decides to investigate Amy’s murder herself. She discovers secrets lurking in the shadows of Hemlock, secrets about Amy’s boyfriend, Jason, her good pal Kyle, and especially her late best friend. Mac is thrown into a maelstrom of violence and betrayal that puts her life at risk.

I’ve been pretty burned out on paranormals, but Hemlock was a refreshing surprise. Yes, there are werewolves, and yes, there’s a love triangle. But at its heart, this story is a mystery – and there are enough secrets to keep you turning pages long past bed time.

World-building is another aspect of this book that makes it stand out from the pack (ha! I am my own best entertainment). Peacock’s clearly given a lot of thought to the impact werewolves would have on a wider society, which adds a level of almost dystopian complexity missing from a lot of other paranormals I’ve read. While I did occasionally feel that Mac was a bit on the clueless side, I identified strongly with the grief and confusion she felt over Amy’s death, and her need to know what really happened to her friends.

I will definitely be checking out the sequel. 🙂

For more information on Hemlock and its sequels, check out Kathleen Peacock‘s website. I read this book for the 13

Book Challenge, part of Amy’s Marathon of Books. Amy’s marathon is designed to raise awareness of the amazing YA books that Canadians are writing, and to raise money to launch a new YA book award. You can donate by clicking the button!

Filed to: Life, the Universe, and Everything
Tagged with: Amy's Marathon of Books, Hemlock, Kathleen Peacock