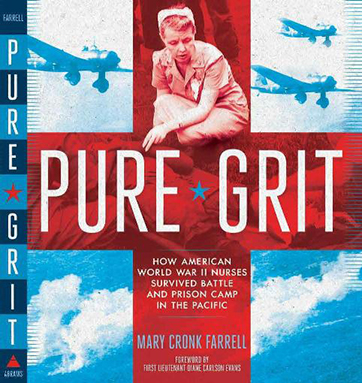 Take it away, Mary!

I was forced to deal with a lot of agonizing material while writing Pure Grit: How American World War II Nurses Survived Battle and Prison Camp in the Pacific. I learned to treasure any small anecdote of hope and healing, such as the following.

In February 1942, the Battle of Bataan raged on a tiny peninsula in the Philippines, as American and Philippine forces faced the Imperial Army of Japan. American Army nurses fought, too, trying to save lives in field hospitals not far from the front lines. The Japanese had cut off supply lines and medical supplies dwindled. The nurses battled a dread enemy called gangrene infection, which could turn a soldier’s fairly minor wound deadly within 48 hours.

Medics were forced to wait until dark to transport wounded men from the combat zone to the hospital, so they stitched deep wounds to stop blood loss. This could trap bacteria such as clostridia in the closed wound, and the gangrene-causing bacteria thrived in this anaerobic (oxygen-free) environment.

The bacteria multiplied in the absence of oxygen, consuming blood and tissue, forming tiny gas bubbles and releasing 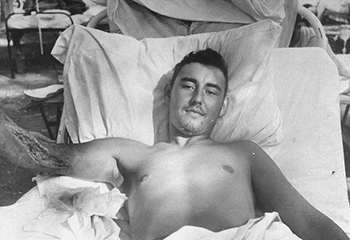 An American serviceman gets open-incision treatment. (Photo from PURE GRIT)

toxins. The nurses soon used up their supply of the anti-toxin used to treat gangrene.  The only way to save a soldier’s life was to cut away or amputate the infected tissue, and it must be done before the toxins flowed through the nervous system to the brain.

The number of infected patients quickly rose, their pus-filled wounds giving off a sweetly, sick odour, their infected limbs swelling to a monstrous size. Hospital staff set up separate wards for these patients, and treating them required courage and a strong stomach.

An army doctor, Lt. Colonel Frank Adamo became desperate and investigated a natural treatment. He sliced open gangrene wounds, and nurses assisted as he cut away infected tissue and swabbed the area with hydrogen peroxide. They then left the wounds open to the air and sunlight, covered only by mosquito netting. Oxygen killed the bacteria. Nurses saw improvement in their patients within 24-hours and many men’s arms and legs were saved from amputation as a result.

To purchase PURE GRIT click here. The book has received starred reviews from Booklist and The Bulletin of the Center for Children’s Books. See more reviews here. Mary Cronk Farrell is an award-winning author of both fiction and non-fiction and former journalist with a passion for stories about people facing great adversity with courage. For more from this author click here.