So I live in Ontario now.

It’s not a whole lot different yet, probably because I spend 90% of my time in the house and when I leave, it’s for Home Depot or groceries. Because new houses need curtain rods and shelving, and, well, there is only so long a person with food allergies can survive on even the most well-researched take out.

Last weekend, though, Tech Support and I decided it was time to broaden our horizons a bit and go explore our new home. Mostly, we were sick of opening boxes and having no idea where to put the stuff that was in them, despite our ruthless purging before the move.

We checked out the local farmer’s market, and then, since we had no actual plans, decided to visit another market up the road. Imagine our surprise when we followed the GPS to main street and found in lined with people…. wearing pumpkin hats.

My friends, we had discovered PumpkinFest. It was AWESOME. 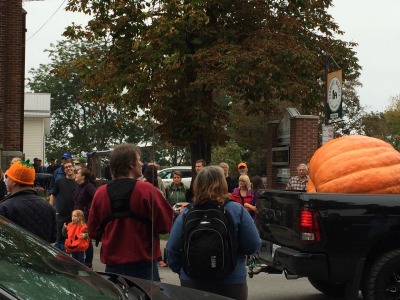 Those people? They were waiting for the parade. The parade was opened by pickups bearing GIANT pumpkins. 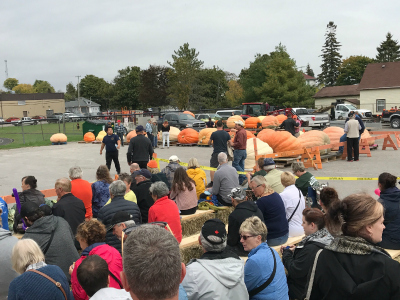 There was, of course, a giant pumpkin weigh in. We did not stay to see who won, because we were too busy checking out the craft fair and the farmer’s market and eating delicious foods and treats made of, naturally, pumpkins. 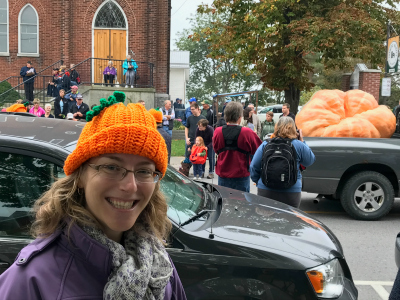 We did get in the spirit though! I supported the local economy in the form of an octogenarian knitter at the church craft sale. I will be rocking this hat while I hand out candy on the 31st.

All in all, a successful first outing in our new home!

What crazy festivals happen where you live? And how do you find out what’s going on in your area? Tips are welcome!

Filed to: Life, the Universe, and Everything
Tagged with: moving, Ontario, tidying up, Pumpkinfest