How did we go from this…

I’ve just started season 10 of Supernatural (hooray, Netflix!), in which Dean Winchester, butt-kicking good guy and slayer of many demons, has in fact, become a demon.

It’s creeping me out.

I realize that’s entirely the effect the show was going for – a deliberately unsettling exploration of the thin line between good and evil in all of us – and I’m sure that Jensen Ackles had a blast taking the character in a totally new direction… but it creeps me out. 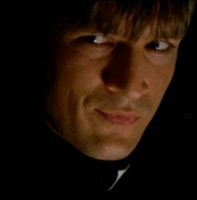 It reminds me of what it was like to watch season 7 of Buffy the Vampire Slayer for the first time, after having come to know and love Malcolm Reynolds on Firefly. When Nathan Fillion first appeared as the disturbing and totally depraved Caleb, I nearly climbed over the back of the couch trying to get away.

What about you? Any actors you loved in one role that shocked you by playing a totally different character? How did you feel about the Mal/Caleb shift, or the good Dean/bad Dean storyline? Share in the comments!