Have you ever noticed that domestic animals share physical characteristics with each other, but not with their wild ancestors? Floppy ears, for instance. Elephants are the only wild species with floppy ears, but they occur in breeds of dog, horse, pig, and even rabbit.

Darwin was the first scientist to study this, but he couldn’t explain it. Almost 100 years later, Russian geneticist Dmitri Belyaev took up the challenge. Belyaev believed that the most important trait domestic animals shared was their behaviour – their tolerance of, and affection for, humans. He believed that selecting animals for tame behaviour changed something so fundamental in the species’ DNA, a cascade of physical changes would also result.

There was only one way to test this hypothesis – an experiment. In 1959, Belyaev set out to domesticate foxes. Starting with animals purchased from fur farms, his team bred only the tamest foxes each generation. After only four rounds of breeding, a fox pup wagged its tail at a researcher… something no fox had ever done before. And it wasn’t just behaviour that changed: fifty years later, the foxes look like this: 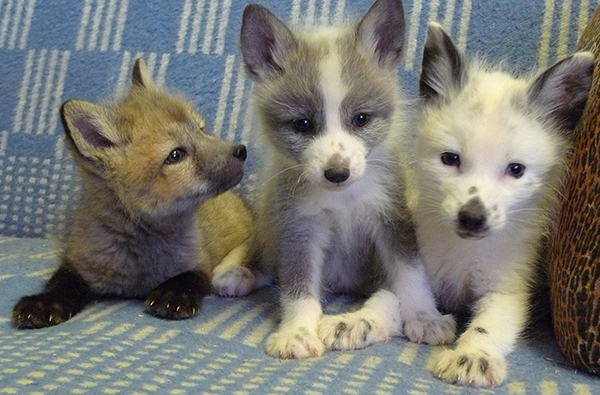 Warning: this much cuteness may cause your heart to burst!
Image courtesy of Dr. Svetlana Gogoleva

The white markings on the face of the center fox is another trait common to domestic animals. Belyaev’s team identified the gene that produces these marks, as well as genes that are linked to tame behaviour – to domestication itself. And these days, the foxes are so domesticated, people keep them as pets!

I learned about this experiment my first year of graduate school. After I finished shrieking “OMG I want one!” I couldn’t wait to learn more about domestic foxes, and I am beyond thrilled that I’ve been given a chance to write about them. Aimed at kids ages 8-10, FOX TALK releases August 20th. It’s about communication between humans and animals, and how domestic foxes helped crack the code. 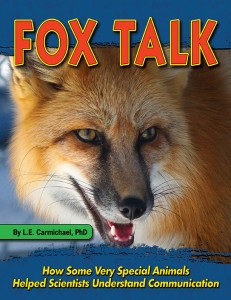 To celebrate the launch – and the launch of my shiny new website – I’m having a Talk About FOX TALK contest! Every comment between now and August 20th (12:01 AM, Atlantic Time) will be entered to win an autographed copy of the book. Everybody who spreads the word gets an extra entry, so share on Facebook, Twitter, or anywhere else you like – just leave me a comment with a link.

For teachers, librarians, and anyone else who works with kids, I’m offering a bonus prize – an hour-long author visit via Skype. You can choose from my workshops and school programs, or request a topic your group will love.

So let’s talk! What are your thoughts on the domestication experiment? Would you want a fox of your own? How much of what you say does your pet understand? I’d love to know. 😀